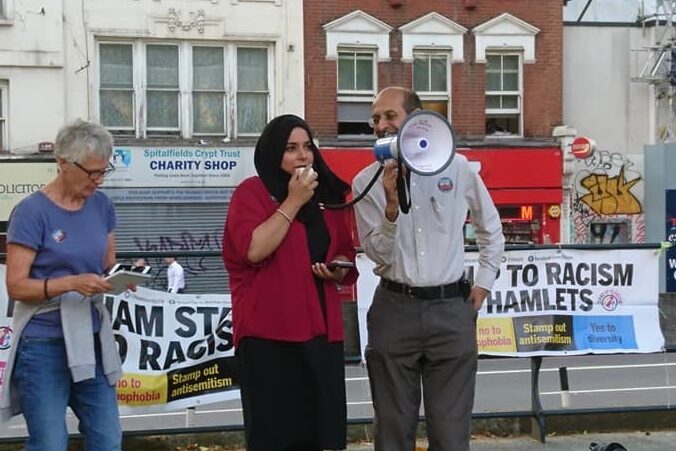 Together we will overcome – speech at protest against antisemitic attack

This speech was given at Altab Ali Park at a protest organised by Tower Hamlets Stand Up to Racism in response to an antisemitic attack in Tower Hamlets.

Tower Hamlets has a long tradition of standing up against fascism, racism and antisemitism.

Of course, it is more than 80 years since the Jewish community of East London and its allies blocked the streets in order to prevent Oswald Mosley and his British Union of Fascists marching through.

And, as people will know, this very park was renamed Altab Ali Park in memory a 25-year-old Bangladeshi Sylheti clothing worker, who was murdered on 4 May 1978, as he walked home from work.

And of course, we today come together again as a community – diverse, multicultural, multi-racial and from different faiths – united and strong, in condemnation of the antisemitic attack last week.

To walk down the street free from abuse and violence, is one of the most fundamental freedoms. As a result of what occurred last week, many will feel less safe and vulnerable whilst they are just going about their daily lives.

That is why it is important that we not only send an immediate message of support to the victim of this disgusting attack but that we make a robust and profound stand collectively against this violation of our values and society.

Reports that racist, islamophobic, and antisemitic hate crime is increasing is evidence to this rotten underbelly of individuals who believe they have the right to express their racist feelings or to show hatred.

As a Bengali woman from East London, I say to those who seek to divide society with fear and intolerance – not on our streets, not in our communities, not anywhere.

Antisemitism in all its forms must and will be defeated.

And to Jewish communities here in Tower Hamlets and beyond, I say … solidarity. We stand with you and together we will overcome.