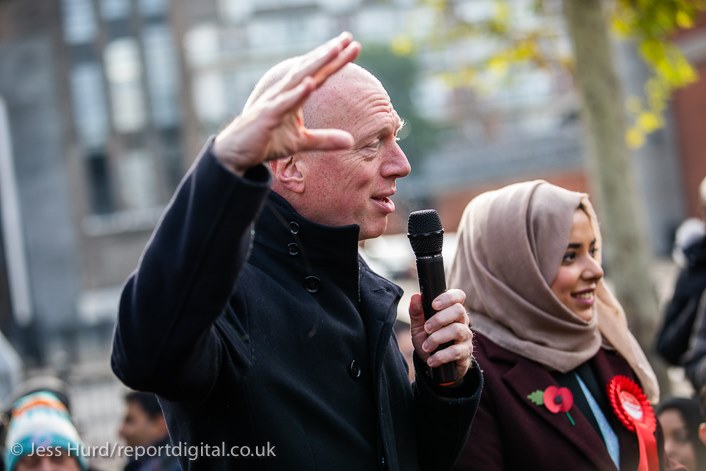 On November 11, I launched our campaign to be MP for Poplar and Limehouse. Matt Wrack, General Secretary of the Fire Brigades Union, was one of the speakers. Here is what he had to say.

“The east end has a history of struggle, of fighting back … you can see the difference here at Chrisp Street and looking over the road, across there, billions of pounds gambled on the international money market, while people on the estates of Poplar & Limehouse struggle to make ends meet. While young people struggle for anywhere to live or get a decent job.

“The only way east enders have ever made progress is when we have stood together, organised and fought back. That’s what the Poplar councillors did…that’s what we did in Cable street when we drove the fascists off the street… Those are the traditions of the east end Labour movement. We’ve; got a choice about what kind of world we want to live in. A government of millionaires for the billionaires. Or a government for the people… There is a chance for change in Poplar and Limehouse with Apsana.”

It was amazing to have the support of our next Home Secretary, Diane Abbott, taking time out of her own launch with Hackney North and Stoke Newington Labour Party! Her contribution to BAME representation is immense. She said our victory ‘would be historic’. Let’s make it so!